Gas Station Blues has been a mainstay in Downtown Issaquah for as long as many remember. For COVID reasons, it went online in 2020. On July 8, 2021, it will take center stage again where it’s meant to be: the parking lot of Historic Shell Station.

Tony Frederickson, president of the Washington Blues Society, helped bring blues to the Shell Station and Confluence park because of his own love for the genre. As nomadic as the stereotypical musician, Tony moved from town to town evangelizing music, but small towns like Issaquah are where his heart is. “I was born in Everett but have lived all over the world,” he said. “Issaquah is great for music. It’s a small town but there’s so much to do. So much culture.” Washington Blues is a charity, dedicated to preserving music and maintaining culture and history. “Blues are the root of all American music,” Tony said.  Gas Station Blues show this year will be live and in-person every Thursday through August. Tony said a lot of his famous friends will be headlining.
First up: John Del Toro Richardson from Houston, a well-known guitarist who has won international blues challenges. Then Eden Moody from Leavenworth.
“She’s a songwriter. Telling the story is what it’s all about. Sharing with others,” Tony said. Tony describes Chris Eger, another artist on the docket, as “a young guy who is one break away from being a national player. A frequent winner of the Best of Blues Award.”
Here’s some copy from me for the upcoming DIA’s next press release. Feel free to use on our pages too!
This season promises to be one of the best seasons yet for Gas Station Blues! The line up is great with outstanding local talent and several national/international musicians joining us as well. The series opener, Jonn Richardson, started the series of with a very high bar and the rest of our line up definitely has the talent to live up to this standard. Eden Moody is a songwriter at heart and her stories and songs reflect this. Chris Eger is a young Northwest performer who is just one little break away from becoming a national player. Suze Sims, our fourth act, has worked hard to over come an injury and is ready to explode back on the music scene. Her new project La Roca, and powerful vocals will have everyone dancing in their seats. Robin Barrett and Tiph Dames bring their music over from Walla Walla and where greatly received last year at the Confluence Music Festival as a band and will surprise many with their duo act. Ross Robinson is a performer I came across at a “Make Music Day” out in Gig Harbor and is a talented acoustic guitar player and very traditional “Blues” man and will entertain all with  his stories and songs. The lovely Annie Eastwood Trio will be out 7th act and will be highly entertaining with their musical talents and solid professionalism. Where ever they go people get up and dance! Closing out out season is Scott Holt, an international/national performer who learned his craft with coaching from Buddy Guy and it shows when he picks up his Guitar! Yes this season promises to be possibly the best one yet! Maybe that’s the lucky “7” effect. Hope to see you out at the live show, but for those of you who can’t attend in person you can catch the live stream on DIA’s Facebook and YouTube pages as well as the Washington Blues Society Facebook and YouTube pages!

COVID forced Gas Station Blues to the internet — yet but the site had a silver lining and drew thousands of people throughout the year. Marina and Christopher park their instruments in La Piazza during the Music Stroll.  The Washington Blues Society also gives out another BB award every year — Blue to the Bone. The winner is determined by the membership board of directors to people dedicated to bringing music alive in their communities. 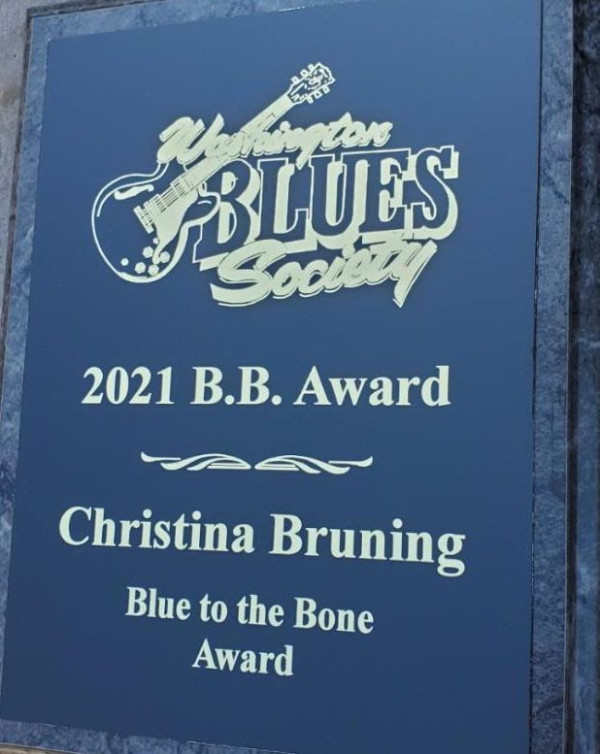 “Someone who is heavily involved,’ Tony said, announcing that this year’s winner is Christina Bruning, DIA president and downtown resident. “Christina is a great example in that she does so much. She’s very committed to Issaquah and the strongest representative they have. “ 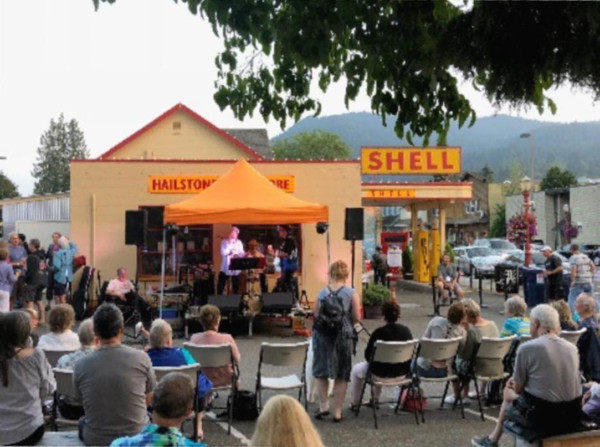 The Rhapsody Project tunes into cultural heritage and social justice

Winners — representing Washington State at the 2023 IBC in Memphis TN